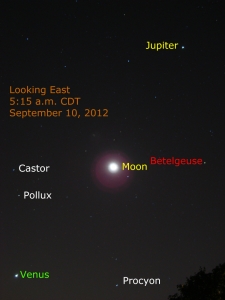 Morning Stars Venus and Jupiter sparkle in the eastern predawn sky in this 30-second image made at 5:15 a.m. CDT this morning from the Chicago area. The waning crescent moon (overexposed in the image) is between the two planets.

Brilliant planet Venus has passed Castor and Pollux (Gemini) and is among the fainter stars of Cancer.  Venus is moving rapidly to the east and passes the Beehive star cluster on September 13.  The cluster is faint; the event can be seen with binoculars or low power in a telescope.

The moon is 25 degrees to the upper right of Venus and in the feet of Gemini.  The moon moves farther east making an interesting configuration with Venus on September 12.  Betelgeuse (Orion) is to the right of the moon.

Bright Jupiter is nearly 50 degrees to the upper right of Venus, among the stars of Taurus. Its bright star, Aldebaran, is outside the image frame.

For our monthly sky watching posting, click here.  Watch the planetary pair in the morning sky throughout the next several months.  Read more about Venus as a Morning Star.   (Click the image to see it larger.)