Earth and Sun are closest (perihelion) on January 4.  The separation is about 91.4 million miles.

Venus rapidly exits the evening sky early in the month, passing between Earth and the sun (inferior conjunction) on January 11, reappearing in the morning sky late in the month. 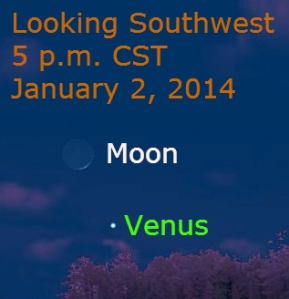 Just nine days before Venus reaches inferior conjunction it appears with a thin crescent moon in the southwestern sky.  The diagram above shows the pair at 5 p.m. CST as seen from the Chicago area.  For other locations look about 30 minutes after sunset.

After Venus leaves the evening sky, Jupiter is the brightest starlike object among a section of the sky full of bright stars.  Jupiter reaches opposition on January 5.  It rises at sunset, appears in the south at midnight and sets at sunrise.  It is on the opposite side of the sky from the sun.  This occurs when our planet passes between the sun and a planet that orbits the sun farther away from the sun than Earth.

As as the distant worlds revolve around the sun, they appear to move eastward compared to the starry background.  Yes, they rise in the east and set in the west each day as our planet rotates.  Their orbital motions carry them eastward.  When the outer planets are at opposition, they appear to stop their eastward movements and reverse their courses, moving westward (retrograde) for a period of time.  They then appear to stop retrograding, moving eastward again.  This apparent westward motion is an optical illusion from our planet passing these distant worlds.

During January, Jupiter retrogrades in front of the stars of Gemini, easily found by its two brightest stars Castor and Pollux.  The chart above shows Jupiter’s January retrograde motion.  The numbers indicate Jupiter’s positions on the January dates (1, 11, 21,31).  Delta Geminorum (The fourth brightest star in the constellation Gemini.  Star brightness in a constellation is designated with a Greek letter.  Delta is the fourth letter of the Greek alphabet.) serves as an excellent milepost for planetary movement.  During the month, notice the position of Jupiter compared to Delta. 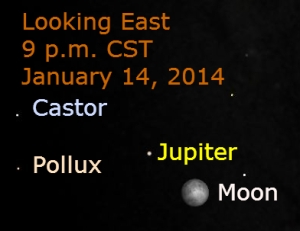 On the evening of January 14 , the nearly full moon appears near Jupiter.

Elusive Mercury appears in the evening sky during the second half of the month.

Just 26 hours past the new phase and with about 1% of the moon illuminated, the moon appears near Mercury on January 31.  The pair is about 5 degrees apart.  Find a clear horizon and begin looking about 30 minutes past sunset.  Binoculars should help you find the planet and the moon in bright twilight.

The New Year begins with three planets in the morning sky:  Jupiter, Saturn, and Mars.

With Jupiter at opposition as described above, it is visible all night appearing near the western horizon before twilight begins. 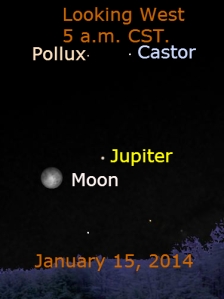 On the morning of January 15, the nearly full moon appears near Jupiter on the western horizon at 5 a.m.  This is a continuation of the evening view of Jupiter for January 14 described above.

Mars and Saturn are in the morning sky throughout the month.  They can be found in the southeastern sky.  While they are not as bright as Jupiter and Venus, they are easy to spot.  Mars races toward and passes Spica during the month.  Saturn is nearly between Zubenelgenubi and Zubeneschamali.

The planets can be distinguished from the stars because they move compared to the distant starry background as they revolve around the sun.  They appear to move eastward compared to the sidereal tapestry.  The chart above shows the eastward motion of the planets during January 2014.  The green dots show the planetary positions on those January dates (1, 11, 21, 31).  The green lines indicate the overall motion.  Mars moves over 11 degrees eastward during the month while Saturn only moves about 2 degrees.  Mars’ orbital motion is over 15 times faster than Saturn’s.  On January 28, Mars passes about 5 degrees above Spica.

The moon moves through the region in the morning sky beginning January 22.  Here are the events:

After its inferior conjunction on January 11, Venus rapidly moves into the morning in the eastern sky.  It is a “Morning Star” for most of 2014.

Venus appears near a waning crescent moon on January 28.

Venus rapidly moves into the morning sky.  By the end of January, it rises two hours before sunrise.

For more about Venus as a morning star in 2014, read our detailed posting here.

This diagram shows the positions of the visible planets on January 15, 2014 as seen from north of the solar system.  Mercury and Jupiter are visible in the evening sky.  Notice that Jupiter is just past opposition by mid-month as it appears near the midnight line.  Both Venus and Mercury are in the same direction as the sun appearing in the sky, primarily during the daytime hours.  Saturn and Mars are in the morning sky.