Mercury rapidly leaves the western sky early in the month and disappears into the sun’s glare.  It passes between Earth and the sun on June 19 and rapidly moves into the morning sky.

Jupiter appears low in the west-northwest, near Castor and Pollux.  This giant planet is gradually disappearing into the sun’s glare.  By month’s end it sets in the western sky during twilight.

Mars  is about halfway up in the southern sky as the sky darkens.  On June 7, the moon appears about 3 degrees to the lower left of the Red Planet.  During the month Mars moves eastward compared to its starry background.  On June 1, Mars is  about 14 degrees to the right (west) of Spica.  By month’s end the pair is separated by 6 degrees. 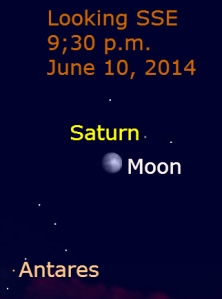 A few nights later, the moon appears near Saturn.  Their separation is about 5 degrees.  Note the reddish star Antares.  It is about the same color and brightness as Mars.  Do not confuse them. 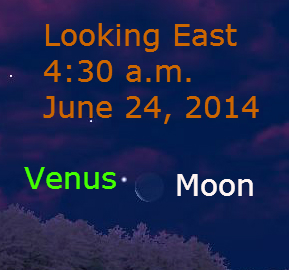 June offers the longest daylight hours and opportunities to view the bright planets.