Venus and Jupiter gleam from the evening sky during April 2015.  Venus is the bright celestial gem that sparkles in the western sky after sunset.  It sets over three hours after the sun, making it easily observed.  The difference between sunset and the planet setting grows to nearly 3 hours, 40 minutes after sunset by months end, allowing Venus to around midnight.

Early in the month, Venus appears nearly 19 degrees to the upper left Mars, fading in brightness and moving into the sun’s bright glare. As the month progresses, Venus moves higher in the sky as the stars appear lower in the west each night at the same time.  Watch Venus approach and move between the Pleiades star cluster and the star Aldebaran near mid-month.  Early in the month. Venus is about 10 degrees below the Pleiades and 20 degrees to the lower right of Aldebaran.

Meanwhile, Jupiter, shines from the southeastern sky near the star Regulus, 80 degrees from Venus.  By late June, Jupiter and Venus appear very close together in the western sky just after sunset.

During the second week of the month, Venus passes the Pleiades.  On the evenings of April 10 and April 11, Venus appears about 2.5 degrees to the left of the cluster.  Look through binoculars to capture a captivating view of the brilliant planet and the star cluster. 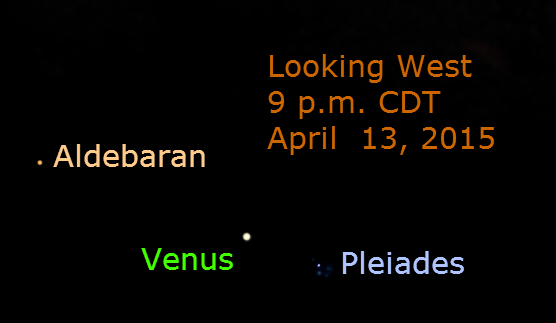 Venus appears to move between the Pleiades and Aldebaran on April 13, with the star about 10 degrees from Venus.

The moon moves farther east each night and reaches Jupiter on April 26, appearing nearly 8 degrees from this giant planet.

By month’s end Venus and Jupiter at about 50  degrees apart and two months from a spectacular conjunction in the western sky.