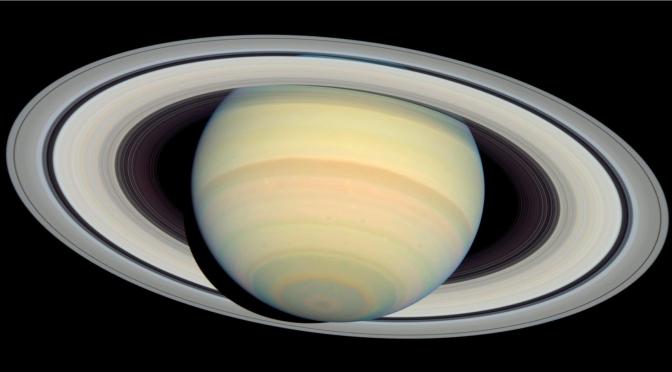 Bright Jupiter and Saturn are in the south during the early evening hours of October.

Bright Jupiter and Saturn are in the southern sky as the sky darkens after sunset during early October.

Both planets are slowly moving eastward in front of the stars of eastern Sagittarius, before their Great Conjunction on December 21, 2020.  Such groupings occur once every 19.6 years.

For more about the Great Conjunction, read our feature article. This is the closest Jupiter – Saturn conjunction since 1623.

Jupiter is 7.1° to the lower right of Saturn.

On the image above, three stars are identified, Pi Sagittarii (π Sgr on the photo), 56 Sagittarii (56 Sgr) and 50 Sagittarii (50 Sgr).  Use a binocular to observe the planets slowly move compared to the starfield.  Jupiter moves away from π Sgr and toward 50 Sgr.  Saturn slowly inches eastward (to the left on the photo) compared to 56 Sgr.

The motion is slow-moving and the anticipatory approach of Jupiter toward Saturn has been occurring since they emerged from the sun’s glare in the morning sky last winter.

Jupiter is now closing in on the Ringed Wonder.

Mercury begins to join Morning Star Venus in the eastern sky before sunrise. The moon is in the morning sky in the west. Three evening planets are found after sunset, Mars, Jupiter, and Saturn. Mars is in the east-southeast and the Jupiter – Saturn pair is in the south-southwest after sunset. Today is a heliocentric conjunction for Jupiter and Saturn.

Brilliant Venus continues to shine brightly in the morning sky. Venus is “that bright star” in the southeastern sky before sunrise. Venus steps eastward in Virgo as Mercury makes its best morning appearance for the year. The crescent moon joins the bright inner planets on November 12 and November 13.

Speedy Mercury joins Morning Star Venus in the eastern sky before sunrise. The first rock from the sun is entering the morning sky for its best appearance of the year. In the evening, Mars shines in the eastern sky, while in the south-southwest Jupiter edges toward its Great Conjunction with Saturn on December 21, 2020.