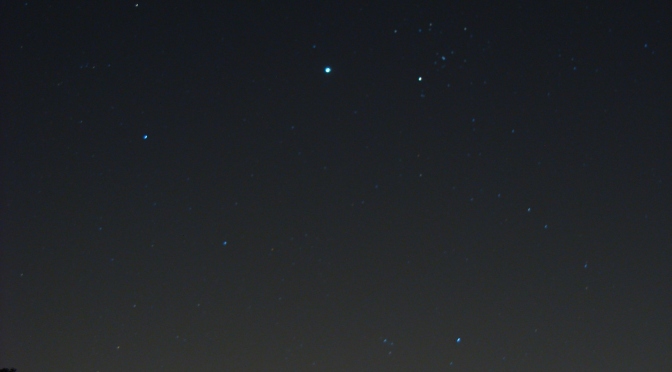 The Winter Triangle is in the south before sunrise. During the nighttime hours four bright planets are visible: Venus, Mars, Jupiter, and Saturn.

Morning: Look for Sirius, Procyon, and Betelgeuse – the Winter Triangle – in the south one hour before sunrise. The bright planets resemble overly bright stars.  An hour before sunrise, brilliant Venus sparkles in the east in front of the stars of Leo.  It continues its eastward steps in front of that starry background.  Mars is retrograding in eastern Pisces.  The planet shines brightly from low in the western sky.  Venus and Mars even outshine Sirius, the night’s brightest star that is low in the southern sky at this hour.

See our summary about Venus during October 2020 and the feature article  about Venus as a Morning Star.

Evening:  Jupiter and Saturn continue to shine from the southern sky after sunset.  Jupiter sets in the southwest a few minutes after 11 p.m. CDT, and Saturn sets about 11:40 p.m.  Jupiter continues to close in on Saturn for their Great Conjunction later in the year.  Meanwhile, rusty Mars sparkles in the eastern sky.  It is a few days past its opposition with the sun.  So, it rises in the east when the sun sets in the west and sets in the west as the sunrises in the east.  The Red Planet is slowly retrograding among the stars of Pisces.  Look each evening to notice the changing position of the planet compared to the dim stars.

For more about the Great Conjunction, read our feature article. This is the closest Jupiter – Saturn conjunction since 1623.

In this commentary is a different idea about year-round daylight time, based on astronomical concepts for the mid-northern latitudes. Year-round or not, a different approach may yield better results.