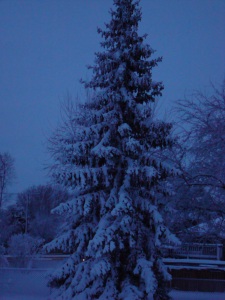 The winter solstice (in the northern hemisphere) is here on December 21 at 10:19 p.m. CST.  The sun reaches its lowest point in the sky and daylight is short.  The darkness around the solstice is a long period.  On December 1, the sun was in the sky 9 hours, 23 minutes (in Chicago) and at other locales at or near this latitude.  On the solstice, daylight’s length is 9 hours, 8 minutes.  Afterward, there is not a sudden snap to longer daylight.  By January 10, three weeks after the solstice, daylight stretches only 12 minutes to 9 hours, 20 minutes.  The length of daylight begins to stretch, nearly 10 hours by the end of January.

Without carefully watching the sun and a calendar, and lack of some astronomical calculations, the date of the solstice would be difficult to determine by experiencing the colder, darker time alone. 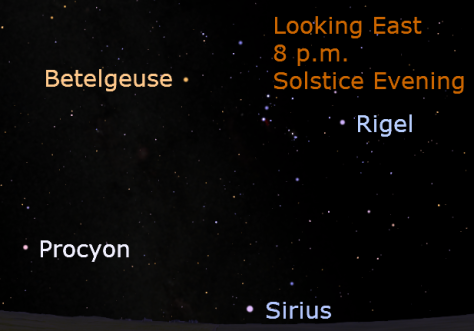 A better indicator of the solstice is the starry night sky.  As the sky is fully-darkened, when most are inside to keep warm from the day’s work, magnificent Sirius gleams low in the eastern sky.  (Venus sparkles wildly in the west at solstice time 2019.)  The Dog Star makes its presence known as it twinkles randomly from its low position.  The Little Dog Star, Procyon, shines to the upper left of Sirius.  Rigel and reddish Betelgeuse shine from above Sirius.

So while daylight finally dwindles to its minimum for this solar cycle, the reliable repetition of the annual stellar rhythms tell us that longer daylight is ahead, although it’ll take a several weeks to notice the change.  Happy Solstice time!  For me, it’s Christmas, so I wish you a Merry Christmas.  Have a blessed holiday.