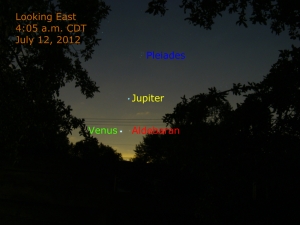 Clear skies prevail again this morning for the display of bright Morning Stars in the eastern sky as seen from the Chicago area. Brilliant Venus and Jupiter dazzle us in the eastern sky during early morning twilight. They can be seen in the eastern sky throughout the predawn hour. In this 20-second exposure made at 4:05 a.m. CDT, Venus is near the star Aldebaran, the brightest star in Taurus. The Pleiades star cluster shines above Jupiter.

This morning Venus reaches its greatest illuminated extent, meaning that it is at brightest during this current morning appearance which lasts the remainder of 2012.

Watch the planetary pair in the morning sky throughout this month. Read more about Venus as a Morning Star.  For our monthly sky watching posting, click here.  (Click the image to see it larger.)