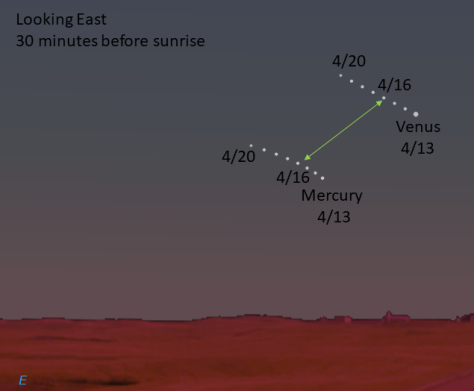 Venus and Mercury appear near each other on mid-April.  There is no conjunction as Mercury does not pass Venus.  Mercury moves faster and, typically, its motion causes the two to pass each other.  During this event, the two planets do not pass each other but they move within 5° of each other.  This event is know as a quasi-conjunction.

Mercury is in a very unfavorable apparition to observe. It appears very low in the east at Civil Twilight, about 30 minutes before sunrise, when the sun is 6° below the horizon. During this appearance this speedy planet does not rise before Nautical Twilight – which occurs about an hour before sunrise; so Mercury visible in a very bright sky, near the horizon. At its greatest elongation, it is only 4° in altitude.  Find a clear horizon and use a binocular.  First locate Venus then look through your binocular to locate this elusive planet.

On these mornings, it’s possible to see four planets in the morning sky — Mercury, Venus, Jupiter, Saturn — although a binocular may be needed to locate Saturn.  The Ringed Wonder is low in the southern sky,  less than one-third of the way up in the sky.  Jupiter is farther west, to the right of the south direction, at about the same height as Saturn above the horizon.

More about the morning planets: