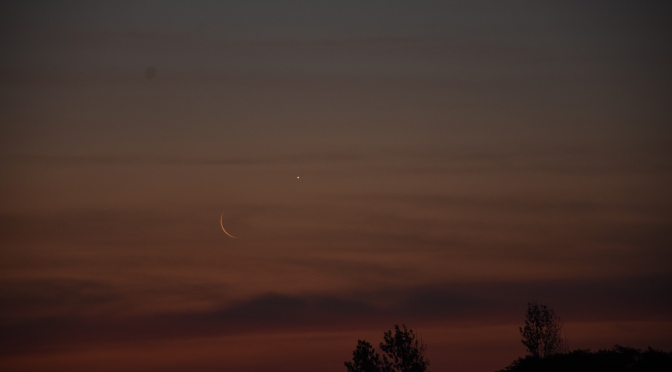 Before sunrise on October 14, the brilliant planet Venus and the crescent moon appear in the eastern sky along with the star Regulus.

Venus is moving eastward in front of the stars of Leo the Lion.

The chart above displays the moon, Venus and two bright stars of Leo – Regulus and Denebola.  Regulus is portrayed as the Lion’s Heart, while Denebola marks the Tail.

See our summary about Venus during October 2020 and the feature article  about Venus as a Morning Star.

Photographers can capture “earthshine” on the night portion of the moon.  Reflected sunlight from Earth gently illuminates the lunar night.  The effect appears on photographs of few seconds.

Brilliant Morning Star Venus shines in the eastern sky among the stars of Pisces. Mars is visible earlier in the morning, but is low in the sky when Venus rises. In the evening, Mars shines from the east, while Jupiter and Saturn are in the south-southwest as a prelude to their Great Conjunction on December 21, 2020. The moon appears to the upper right of Mars.