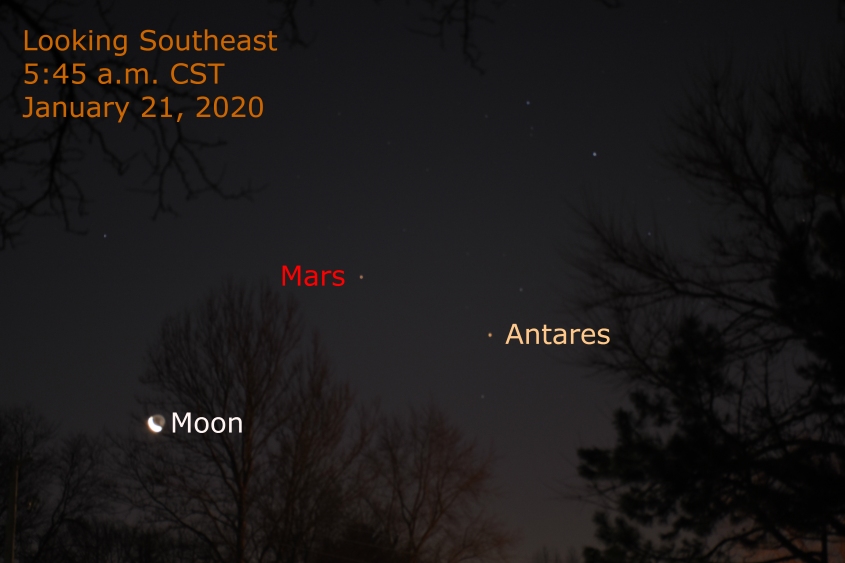 During a cold, clear morning in the Chicago area, the planet Mars is about 5 degrees to the upper left of the star Antares, the Red Planet’s rival.  The star is about the same color and brightness as Mars when the planet passes by about every 2 years.

This morning the old moon (overexposed in the image above) appears to the lower left of the Mars-Antares pair.  Notice that the night portion of the moon is gently illuminated by the sunlight reflected from our planet.

See more about where to locate Mars. 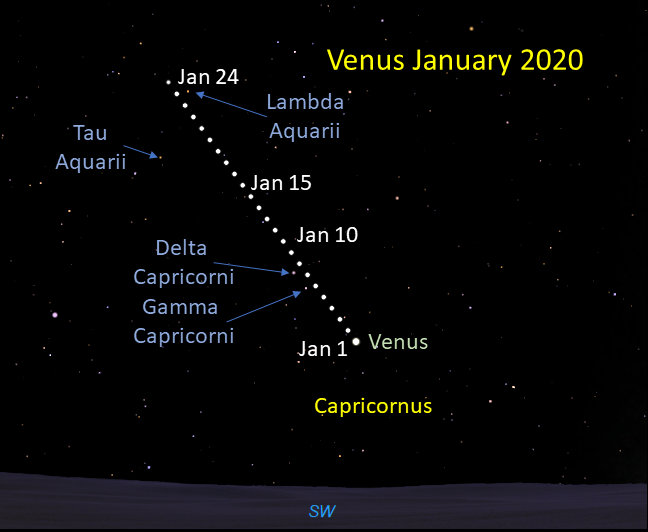 Venus begins the New Year among the dimmer stars of eastern Capricornus. Now setting about 3 hours after the sun, watch Venus move eastward into Aquarius and toward a Neptune conjunction.

As the New Year opens, brilliant Venus is 35° east of the sun, setting nearly 3 hours after sunset.  Use a binocular to track Venus against the dimmer starfield.

On January 11 Venus moves into the dimmer starfield of Aquarius.

On January 26, through a telescope observe that Venus is 75% illuminated, an evening gibbous phase that is 15” across. 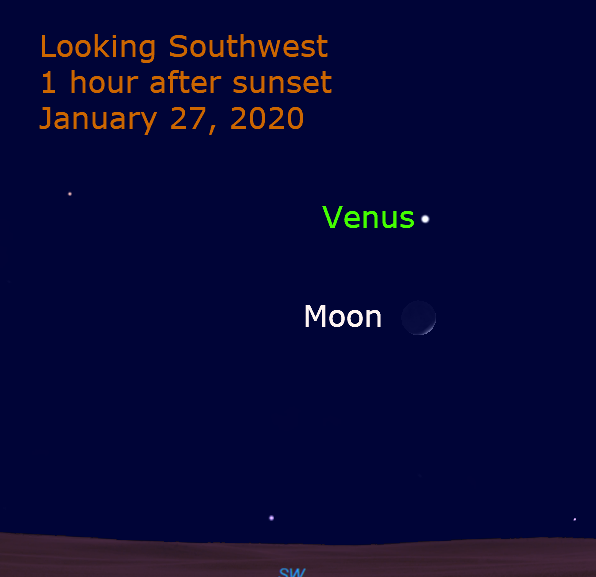 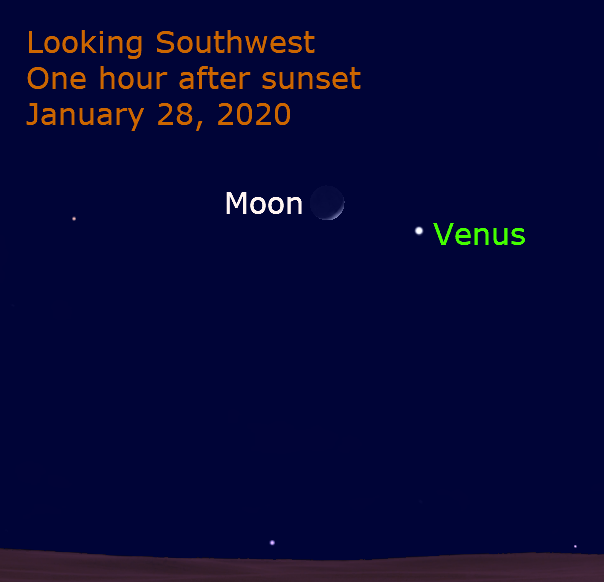 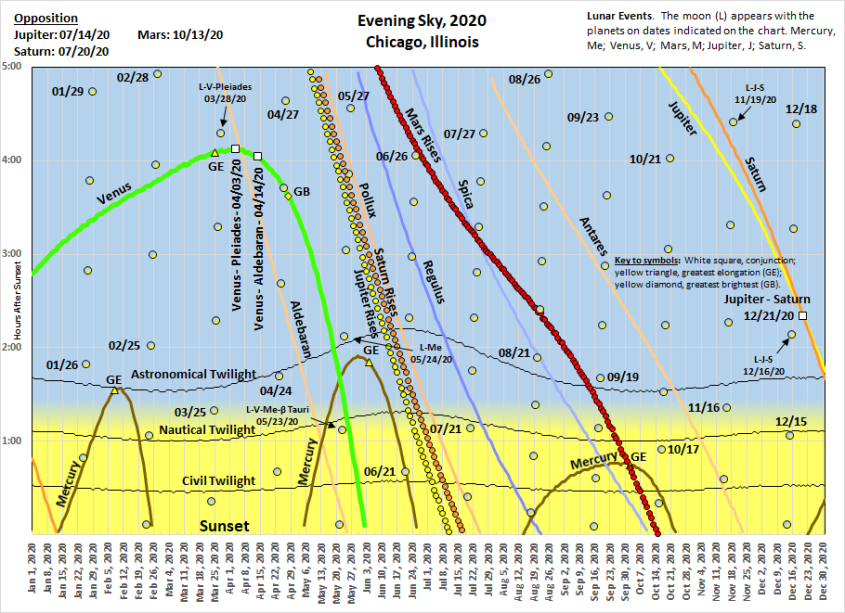 This chart shows the summary of the setting of the naked-eye planets, moon, and bright stars near the ecliptic, the plane of the solar system, for 2020. The chart shows the setting of these celestial bodies compared to sunset for time intervals up to five hours after the sun’s disappearance. The three phases of twilight are displayed as well. On this chart, activity occurs in the western sky, except for the rising curves (circles) of Jupiter, Saturn and Mars. When they rise in the east at sunset, they are at opposition.

As 2020 opens, Venus is the bright Evening Star, appearing in the southwest. Mercury makes its best evening appearance, setting at the end of evening twilight during early February. Mercury’s June elongation is larger, but it sets several minutes before the end of twilight, making it difficult to observe in the brighter sky. After Venus moves past the Pleiades and Aldebaran, it moves toward Elnath (β Tauri), and then plunges toward its inferior conjunction. Jupiter and Saturn pass opposition during July. After Venus disappears from the evening sky, the slow procession of bright stars – Pollux, Regulus, Spica, and Antares – disappears into evening twilight. Jupiter and Saturn appear on the setting chart in late October, just after Mars reaches opposition. The moon has two interesting appearances with the planetary duo on November 19, 2020 and just days before the Jupiter- Saturn Great Conjunction on December 21, 2020.

The chart is calculated from data by the U.S. Naval Observatory, for Chicago, Illinois. 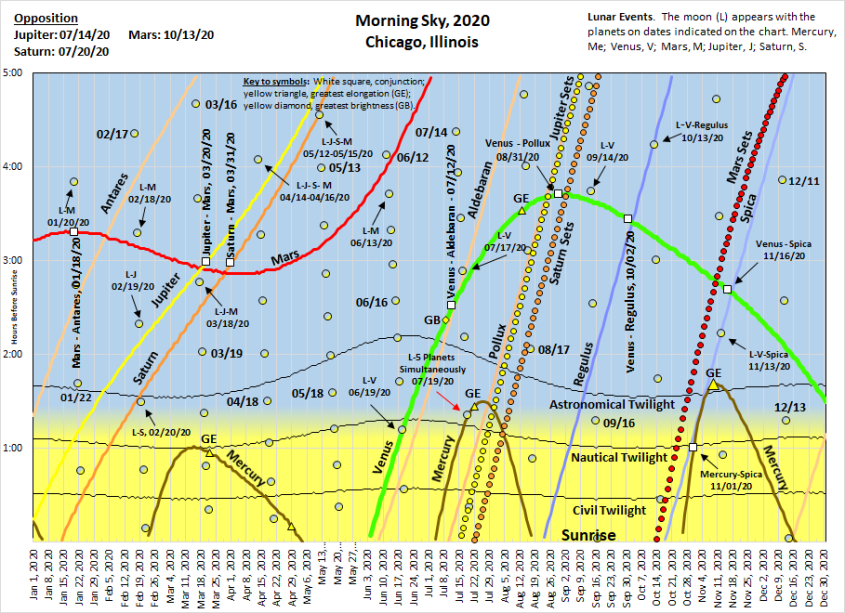 This chart shows the summary of the rising of the naked-eye planets, moon, and bright stars near the ecliptic, the plane of the solar system, for 2020. The chart shows the rising of these celestial bodies compared to sunrise for time intervals up to five hours before the sun’s appearance. The three phases of twilight are displayed as well. On this chart, activity occurs in the eastern sky, except for the setting curves (circles) of Jupiter, Saturn and Mars. When they set in the west at sunrise, they are at opposition.

Early in the year, the morning sky offers the three Bright Outer Planets – Jupiter, Saturn, and Mars – in the eastern predawn sky. As Mars moves eastward it passes Antares, Jupiter and Saturn. On several mornings, the moon passes the planetary trio. The highlight occurs on the morning of February 18 as the moon occults Mars as sunrise approaches in the Central U.S. Venus enters the morning sky at mid-year. The appearance of a lunar crescent with the brilliant planet is a beautiful sight. The moon appears with Mercury as the planet enters the morning sky in late July. On the morning of July 19, the moon and the five naked eye planets are in the sky. As the moon moves toward its evening appearance, Mercury appears higher in the sky, making it a little easier to see. Venus reaches its period of greatest brightness; the mid-brightness date is marked by the yellow diamond. Venus moves past Aldebaran, Pollux, Regulus, and Spica as it moves towards its superior conjunction in early 2021. Mercury’s best morning appearance occurs during November. While this is its smallest morning elongation, the angle of the ecliptic places it higher in the sky.

The chart is calculated from data by the U.S. Naval Observatory, for Chicago, Illinois. 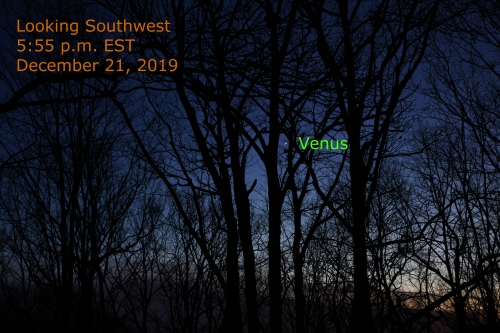 Solstice evening brought a clear, cobalt-stained sky after a biting, cloudy beginning of the day.  Brilliant Venus appeared in the southwest among the trees.

Later in the evening, a walk under a clear, dark firmament showed the magnificence of an early winter sky.  Majestic Sirius twinkled wildly above the horizon.  Reddish Betelgeuse – dimmer than usual – and sapphire-blue Rigel stood regally above the night sky’s brightest star.  Reliable Procyon appeared with more height than the grandest star.

The pack of Pleiades appeared too high for convenient view, although they seemed to be pulling this bright Winter Congregation westward.

The Great Square spread across the western sky with a strand of Andromeda’s stars pointing toward Perseus and Cassiopeia.  The Great Spiral, though, seemed lost in the creeping glow of a nearby city.  Deneb, that grand star of the Swan and Summer, lingered in the northwest.

The Grand Dipper climbed into the northeast, with the magic Pointers leading us to the star that never moves, Polaris.  Its position showed us, though, that the road where we walked was not due north or straight as we first perceived.  That dipper was using its muscle to help us see that Leo’s rising was near.

Before retracing our steps to retire for the evening, the glow of Orion’s stellar incubators blazed forth to our dark-adapted eyes.

Younger voices leaned in to hear the stories of the stars and inquire about the great celestial mysteries. 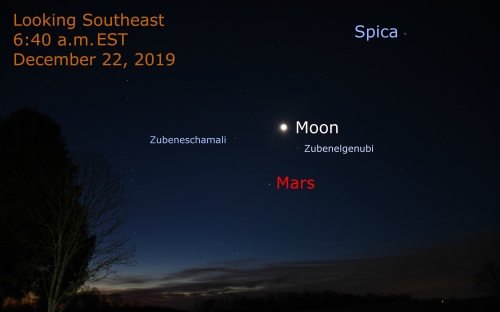 Next morning clear skies prevailed again.  As the new day grew in the southeast, the crescent moon stood above the pincers of the ancient scorpion, with Mars not far away.  The gleam of the Red Planet was not what many expected.  It’s not the fiery orb of science fiction.  Rather, it showed as a somewhat bright reddish star, not as bright as we might expect when it is near our home world.

Now Leo was in the sky, tilting westward.  Only the arc of Procyon, the Gemini Twins, and the Goat Star remained in the western sky from last night’s awe-inspiring display.  Spica and Arcturus sparsely marked the morning glory, unlike that celestial opera we saw last night.

Vega, now, appeared higher in the northeast with Deneb lower near the horizon, this morning’s position much different from last night.

The sky soon filled with sunlight. Our central star seems to always win over our dimmer and more distant celestial suns.  Until the next time when there’s a walk under the dark star-filled sky in that special place where the road does not run true north to south. 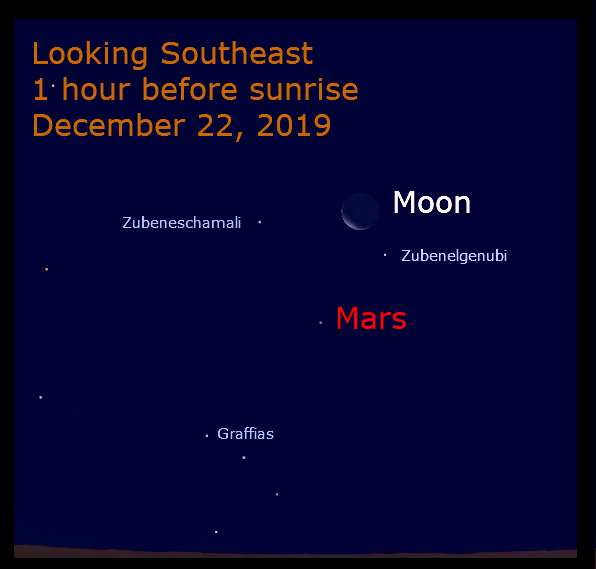 During late December, the moon appears near brilliant Venus in the evening sky and Mars in the morning sky.  Here are the highlights:

December 22: One hour before sunrise, Mars, 18° in altitude in the southeast, is over 8° to the lower left of the waning crescent moon that is 25.9 days old and 16% illuminated. The moon is above a line that connects Zubenelgenubi and Zubeneschamali, the pincers of the Scorpion – on ancient star maps. The lunar crescent is 3.5° to the upper left of Zubenelgenubi. 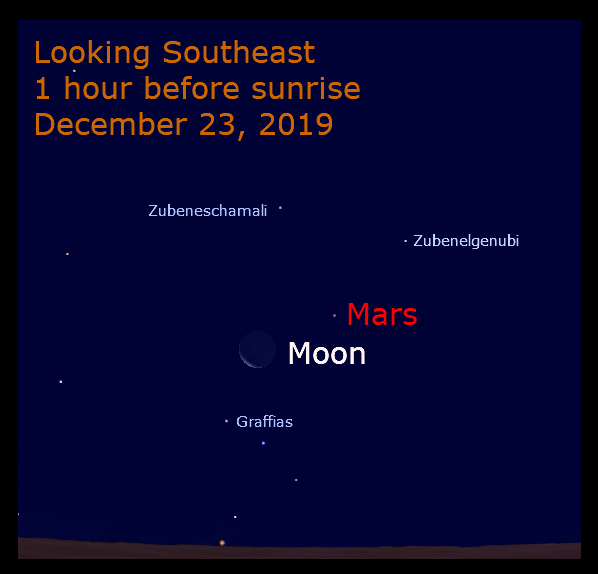 December 23: One hour before sunrise, Mars, over 18° up in the southeast, is 6° to the upper right of the crescent moon. The old moon is 26.9 days old and only 8% illuminated.

December 28: Nearly a week later than its appearance with Mars, the moon returns to the evening sky in the west.  Forty-five minutes after sunset, Venus is 17° in altitude in the southwest. The moon is 2.4° below the planet. The moon is 2.8 days old and 8% illuminated. 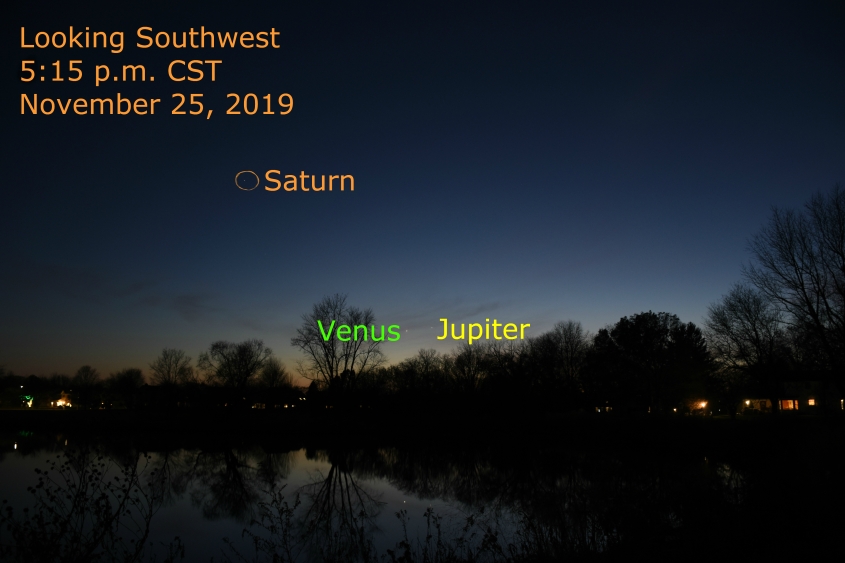 One night past their conjunction, Venus appears to the left of Jupiter this evening about 45 minutes after sunset.  Venus continues to move away from Jupiter and toward Saturn.  Venus passes the Ringed Wonder on December 10.  Meanwhile, look for the crescent moon and Venus on November 28, Thanksgiving evening in the U.S.  See the links below for more details.

Read more about Venus as an Evening Star at these links: