Three planets, Venus, Jupiter, and Saturn, along with the moon, shine during early evening hours as seen from the Chicago area this evening. 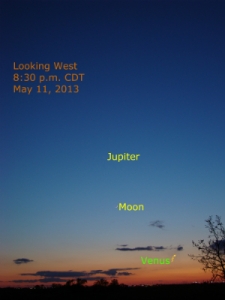 Venus, about 45 days past superior conjunction, appears low in the western sky as shown in the image above.  (Click the image to see it larger.)  The waxing crescent moon, appears 10.5 degrees to the upper right of Venus with bright Jupiter 7 degrees above the moon. 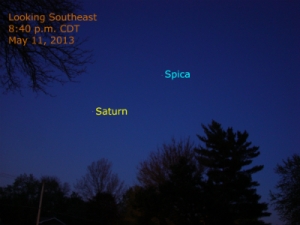 As the sky darkens further, Saturn is visible in the southeastern sky with Spica (Virgo), 14 degrees to the upper right of the planet as shown in the image above.  (Click the image to see it larger.)

Later in the month, Mercury joins Jupiter and Venus in the western sky.  For more about this celestial grouping, see our monthly skywatching posting.

For more about Venus as an evening star, see our detailed explanation of this evening appearance this year.