Mars and Saturn reach opposition during late Spring.  Mars (astronomically) appears opposite the sun, just after it sets, as seen from the Chicago area, on May 22.  On the previous evening, Mars appears near the moon, Saturn, and the star Antares.  On the chart above, the moon appears about six degrees to the upper left of Mars and Saturn is 12.5 degrees to the lower left of Saturn.

At opposition, a planet rises in the east at sunset, it is in the south at midnight, and sets in the west at sunrise.  It is closest to our planet and at its brightest in our sky.

Mars revolves around the sun once every 687 days, that’s nearly 1.9 times an Earth year.  To keep the arithmetic simple, Mars moves around the sun on a larger orbital path about half the speed of Earth.  So about every two years, Earth passes Mars and we see the Red Planet gleaming in the sky.  Actually opposition occurs every 778 days; that’s about every 25.5 months.

At this opposition Mars is only half Earth’s distance to the sun from us.  The planet has a slightly irregular orbit.  Since its distance from the sun varies, its opposition distance varies from about 63 million miles to about 45 million miles.  During the 2018 and 2020 oppositions, Mars is closer than this year.  However, its brightest rivals that of Jupiter which shines high in the southern skies during the early evening hours.  See this article about Jupiter during May 2016.  At this opposition, Mars is about 7 times brighter than Saturn.

Interestingly, Venus and Mercury never appear near Mars and Saturn when the latter are at opposition.  Venus and Mercury are always seen near the sun, and can appear with the outer planets when these remote planets are near their solar conjunction when they are far from Earth.   So we never see a brilliant Mars along with a brilliant Venus.  When the two appear together, Mars is much dimmer because it is far from us. Here’s a view of them during 2015, as Mars emerged from its solar conjunction.

Just 12 days after the Mars opposition, Earth passes Saturn, placing it at opposition.  The chart above shows Saturn and Mars on the night opposition occurs.  The event occurs at 1:37 a.m. CDT on  June 3. 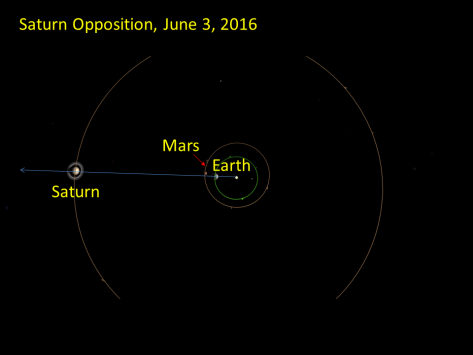 Unlike Mars, Saturn is much slower.  Its solar year is nearly 30 earth-years long.  Opposition occurs every 378 days as our planet catches the Ringed Wonder that quickly.  While Saturn is much larger than Mars and it is about 840 million miles from us, it shines with the brightness of a typical bright star; it is about 2.5 times brighter than the distant Antares.