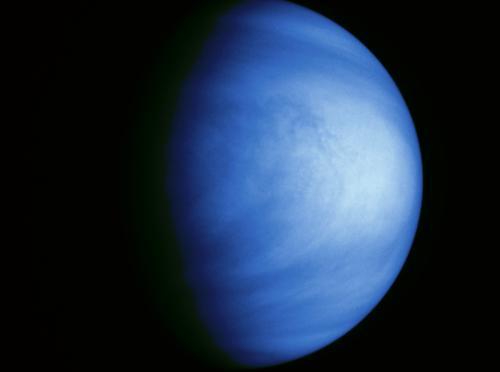 Venus and Mars shine from the morning sky before sunrise. Venus moves into Orion, while Mars marches eastward in Pisces.

This morning – over 90 minutes before sunrise – brilliant Venus is on its first day of eight days touring the northern reaches of Orion, in the Hunter’s club.  This morning Venus is 1.1° to the upper right of the star Chi1 Orionis (χ1 Ori on the photo) and 3.3° below Zeta Tauri (ζ Tau), the Southern Horn of Taurus.  With a binocular watch Venus pass χ1 Ori and move toward Chi2 Orionis (χ2 Ori).

Through a telescope the planet’s is a thick morning crescent phase that is slightly less than half full.

Farther westward, Mars is high in the south-southeast, marching through the dim stars of Pisces.  This morning it is 0.5° to the upper left of 89 Piscium (89 Psc) and 3.4° to the lower right of Mu Piscium (μ Psc).

At this hour Jupiter and Saturn are below the horizon in the southwest.  In the hours following sunset, look for them in the southern sky.

Here is a daily summary about the planets during August.

The moon and Mars appear together for the second time during the month on October 29, 2020.

During October 2020, Mars appears as a very bright star in the eastern evening sky and western morning sky. Mars is closest to Earth on October 6, and at opposition a week later. The moon passes the planet twice, October 3 and October 29.