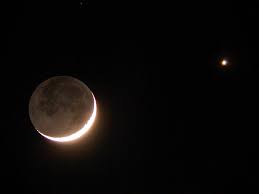 The Sun reaches its southern-most point in its yearly travels at 11:30 p.m. CST on December 21, signalling the beginning of winter in the northern hemisphere and the beginning of summer for southern latitudes.  This is the Winter (December) Solstice.

The Moon  is in total lunar eclipse on December 10, but the best parts of the eclipse are not visible from the Chicago area.  The eclipse begins at 5:33 a.m. CST, when the moon enters Earth’s penumbra.  The lunar darkening is largely unnoticed by most observers.  At 6:45 a.m. CST, the moon enters the darker shadow where the partial eclipse begins.  The moon is very low in the western sky, setting only 25 minutes later.  The sky is brightening as the moon sets with sunrise.  Farther west in the U.S. more of the eclipse is visible, although the full eclipse is visible from the Pacific, Australia and Asia.

Mercury moves rapidly past Earth (inferior conjunction) on December 4 and into the morning sky.  During the last half of the month it makes an appearance low in the eastern sky somewhat near the star Antares.  The chart above shows Mercury, the moon, and Antares at 6:30 a.m. on December 22.  Find a place with a clear view of the horizon to see the widely spaced trio.  Binoculars will help locate Mercury and Antares.

Venus is the bright “star” in the southwest, just after sunset.  Its brilliance can be easily confused for an airplane.  Late in the month, the moon appears near Venus as displayed on the chart above.

Mars is a reddish “star” that rises around 10:30 p.m. during this month.  It is near the stars of Leo (Denebola and Regulus).  On December 16 and 17, the moon is nearby and is identified on the chart above in the southern skies at 5 a.m.

As the sky darkens each evening with Venus in the west, bright Jupiter is in the eastern sky.  Jupiter rises during the daytime and is high in the southeast by 8 p.m.  The chart above shows Jupiter and the moon for December 5 and 6.  Jupiter appears to move westward as  our planet rotates, setting in the western sky around 3 a.m.

Saturn rises during the predawn hours and is visible low in the southeast around 5 a.m.  It is near the star Spica.  The constellation Corvus is nearby.  One December 19 and 20, the moon helps with the identification of Saturn and Spica.

Viewing the morning sky, three planets (Mercury, Saturn, and Mars) line up across the sky in late December.  At 6:40 a.m., Mercury is low in the east, Saturn is in the south, and Mars is higher in the southwest.  The chart above shows the three planets at this time.

Viewing the solar system from above, the trio described above are on the same side of the sun as Earth, appearing in the morning sky.  Venus and Jupiter are in the other side appearing in the evening sky.

As the daylight continues to shrink, the bright winter sky appears earlier and stays longer, giving observers an opportunity for some skywatching.

‹ Notes From the Virtual School Symposium 2011
Online learning: Shouldn’t We Do better? ›