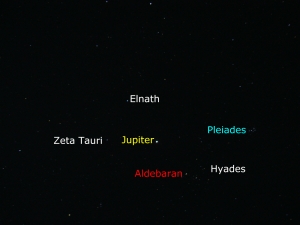 Bright planet Jupiter enters the evening sky this month. It is among the stars of the constellation Taurus, near Aldebaran and two prominent star clusters: the Pleiades and the Hyades. The Pleiades resembles a miniature dipper while the Hyades resemble a check mark next to Aldebaran. With Aldebaran, which is not part of the cluster, they make a “V” shape. The horns of Taurus are marked by Elnath and Zeta Tauri.

At the start of the month, Jupiter rises in the northeast at about 9:45 p.m.  and rises noticeably early each week.  By month’s end, it rises at about 7:40 p.m.  It is well up in the western sky in the morning as Venus continues to put on its dazzling display during October in the predawn eastern sky.  On October 1, Jupiter and Venus are separated by 71 degrees.  By month’s end, Venus’ rapid eastward motion carries it nearly 110 degrees away from the giant planet.

Jupiter begins to retrograde during the month.  This optical effect occurs when our planet moves between the sun and a planet outside Earth’s orbit.  As a planet revolves around the sun, it appears to go eastward among the stars.  As a faster moving Earth catches and passes the planet, the outer planet appears to stop its eastward movement and move backwards (westward) compared to the distant stars.  The motion is small at first then it increases.  During October, Jupiter retrogrades about 1.5 degrees.  The chart above shows Jupiter on October 1, October 22, and October 31 compared to the starry background.  (Click the image to see it larger.) 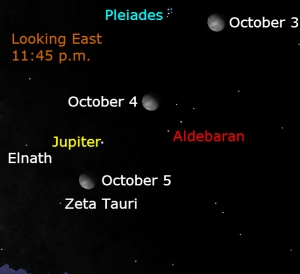 Two planets (Mercury and Mars) appear low in the southwestern sky during evening twilight.  Mercury is always seen during evening twilight or morning twilight as its orbit is inside Earth’s and always appearing near the sun.  It never appears in a dark sky or at midnight.  The planet reaches its greatest angular separation from the sun on October 26, yet because the view of the solar system is poor during early autumn evenings, this elusive and speedy planet appears near the horizon.

On the evening of October 16, as indicated in the chart above, the waxing crescent moon appears near Mercury.  The star Zubenelgenubi appears above the moon.  Find a clear southwestern horizon.  Binoculars will help to locate the planet.

As the moon progresses through its phases, it passes Mars on the evening of October 18.  Mars is near Antares, the brightest star in Scorpius. 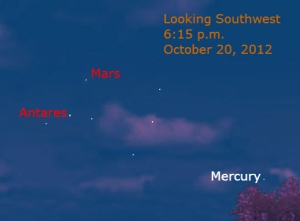 Mars passes Antares on October 20, with a separation of about 3.5 degrees.  Antares is translated as the “Rival of Mars.”  Both have nearly the same color and are of nearly equal brightness.  Mars has a reddish appearance because is surface is covered with red-orange dirt and we see it when the sun shines on it.  Antares is a star and its color is from its temperature.  Mars is much closer to us as it is part of the solar system.  When it appears to pass Antares, Mars is at a distance equal to twice the distance between the Earth and Sun.  Antares is about 600 light years away.  Traveling at 25,000 miles per hour, a trip to Mars would take less than a year.  At the same speed a trip to Antares would take over 16,000 years!

Saturn is not visible this month. It is leaving the evening sky, passing behind the sun (conjunction) on October 25. It reappears in the morning sky late in November. On November 27, Saturn is paired with Venus.

Venus continues its brilliant display as a Morning Star in the predawn eastern sky.  (For more information about Venus as a Morning Star, click here.)  Venus is the brightest starlike object in the sky, during the hours before sunrise.  At the beginning of October, Venus rises about 3.5 hours before the sun and about 3 hours by month’s end.  During the month, Venus moves through the constellation Leo and into Virgo. 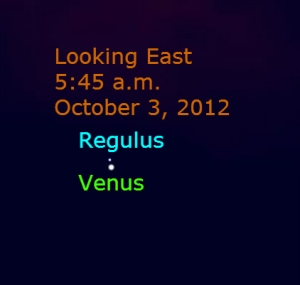 On October 3, Venus passes Regulus, the brightest star in Leo.  The pair appears 0.2 degrees apart!  While they appear close together, Regulus is 5 million times farther away than Venus!

Several mornings later on October 12, as Venus continues its rapid eastward orbital motion, the moon catches Venus.   On this morning Venus appears about midway between Regulus and Denebola, the tail of the Lion. 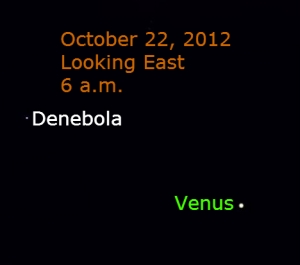 Venus passes about 11 degrees from Denebola on October 22.

In this month’s solar system view (Click the image to see it larger), Venus and Jupiter are on the morning side of Earth, although Jupiter now rises before midnight. Mars and Mercury are on the evening side of Earth. Notice that an imaginary line drawn between Saturn and Earth nearly goes through the sun.  Saturn is in the sun’s bright glare.

Error: Twitter did not respond. Please wait a few minutes and refresh this page.