Days continue to lengthen after the December solstice.  The shaded area of the chart above (click it to see it larger) shows the amount of daylight in January compare to the entire year, the red curve.  Daylight increases by nearly 50 minutes during January; by month’s end the sun is in the sky for 10 hours.  (The chart is calculated from U.S. Naval Observatory data)

The Earth reaches its closest point to the sun on January 4 at 1  a.m. in its slightly eccentric solar orbit.  The perihelion distance is about 3% closer to the sun than it is at its farthest point (aphelion) on July 6.

Early in the month Mercury appears near Venus.  When visible, Mercury appears near the horizon and only during twilight.  From Earth, it is never seen in a dark sky.  Venus and Mercury are emerging out of the sun’s glare.  Use Venus to locate Mercury  on days around January 10.  The chart above shows the pair on January when they are less than one-half degree apart with Mars about 20 degrees to the upper left of them. 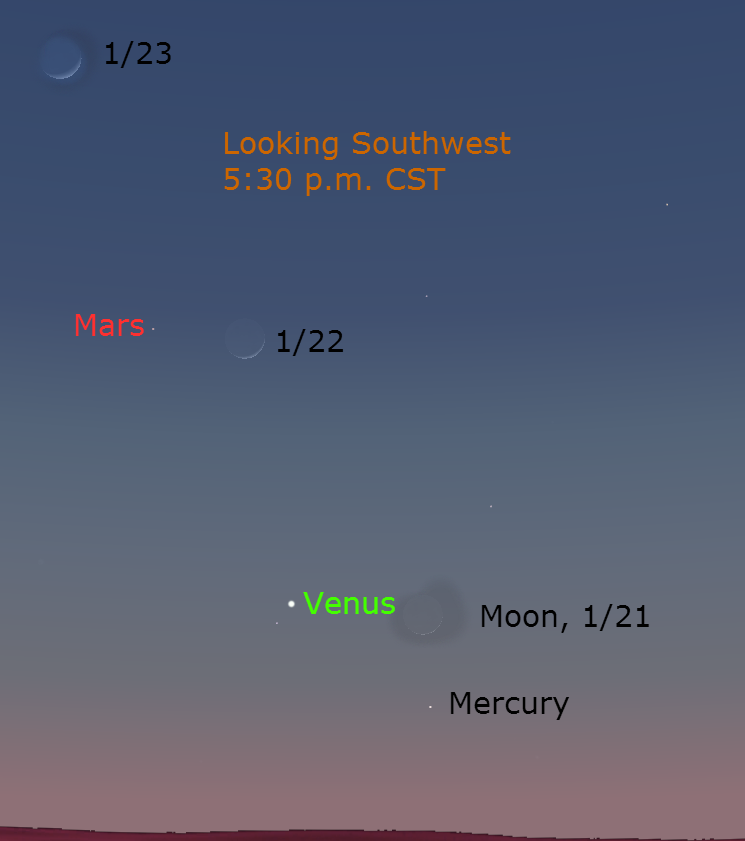 Meanwhile, Jupiter rises in the east around 8 p.m. early in the month,

Jupiter shines from in front of the stars of Leo with its bright star Regulus.  The head of the lion figure in the stars resembles a backwards question mark and is commonly known as “The Sickle.”  The chart above shows Jupiter and Leo on January 10, when Jupiter and Regulus are 9 degrees apart.

On the night of January 7/8, the moon appears  near Jupiter and Regulus.  The chart above shows them at 2 .m. (January 8) when they appear in the southern sky,

During the night, Jupiter appears to move westward, as our planet rotates.  The chart above shows Jupiter and Leo high in the western sky at 4 a.m. on January 15.

As Jupiter shines from the western sky  in the mornings of January, Saturn climbs into the southeastern sky.

This Ringed Wonder shines from in front of the stars of Scorpius, with its bright star Antares.  On January 8, appears about 10 degrees above the star. 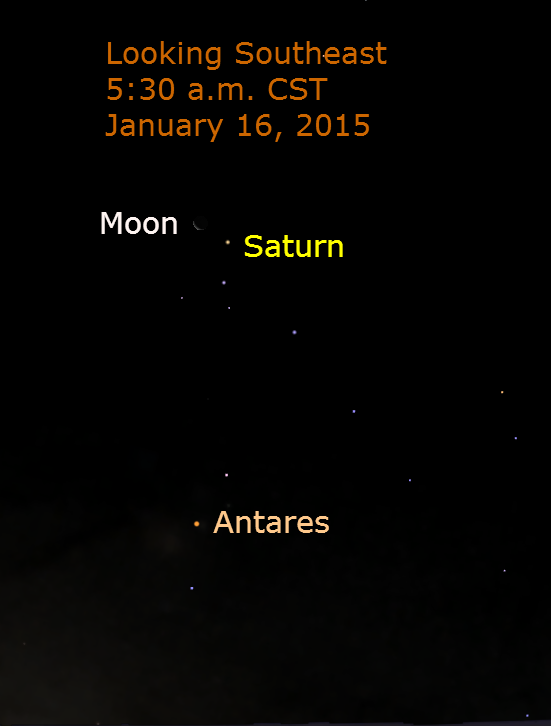 On January 16, the crescent moon appears near Saturn.

Comet Lovejoy brightens during the evenings of January.  While comets rarely “burn bright,” this one is brighter than most.  Some observers have reported seeing the comet without optical assistance after they first found it with binoculars.  The chart above shows the comet on the evening of January 15 when it is near Aldebaran and the Pleiades.  Look for it with binoculars.  It appears as a fuzzy mass with a concentrated center.  A fuzzy tail may extend to the east.  Once found with binoculars, look for it with your eyes alone without the help of the binoculars.