This article outlines the next Venus-Jupiter Epoch Conjunction in 2017 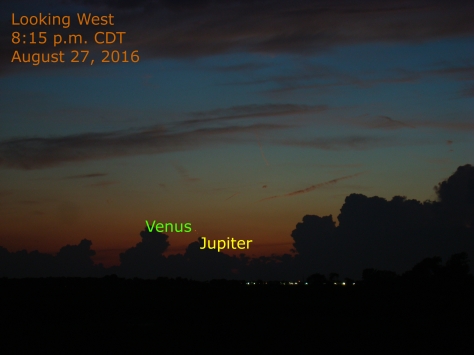 Here is the view of the conjunction on 8/27/16.  Click the image to see Venus and Jupiter.

The link to our video about this conjunction

Just 424 days after the last Epoch Conjunction, Venus and Jupiter pass again in the western evening sky on August 27, 2016, shortly after sunset.  The image above shows the two planets when they were about one-third of a degree apart during the 2015 conjunction.  The 2016 conjunction is three times closer.  This article outlines the circumstances of conjunctions between Venus and Jupiter, the events of this conjunction, and concludes with a list of future Venus-Jupiter conjunctions.

Conjunctions of the bright planets occur when they appear to move past each other in the sky.  Sometimes they seem to nearly meet, although they are millions of miles apart.  A Venus-Jupiter conjunction occurs between 34 days and 449 days, depending on the relative positions of the three planets (this includes Earth).  Venus revolves around the sun once in about 225 days.  Because our planet is moving, Venus catches up to and passes by Earth every 584 days.  Jupiter is a slower moving participant in this celestial waltz as it revolves around the sun once in nearly 12 years.

Jupiter’s movement in the sky largely follows the earth’s revolution around the sun and mostly reflects the annual westward advancement of the starry background.  Jupiter first makes a morning appearance in the eastern sky, just past conjunction when Jupiter is on the far side of its orbit behind the sun.  Each week it appears higher in the sky and farther west at the same time each morning.  Several months later, it appears in the western sky just before sunrise from this slow westward celestial migration.  At this time it is at opposition with Earth between the sun and Jupiter; they are on opposite sides of our sky.  At this time, Jupiter rises a sunset, appears in the south at midnight and sets at sunrise — appearing in between at other times during the night.  Jupiter continues to rise earlier each week, eventually appearing in the south at sunset.  As Jupiter heads for conjunction (behind the sun) it appears in the western sky at sunset, eventually setting with the sun.  This entire cycle takes 399 days. 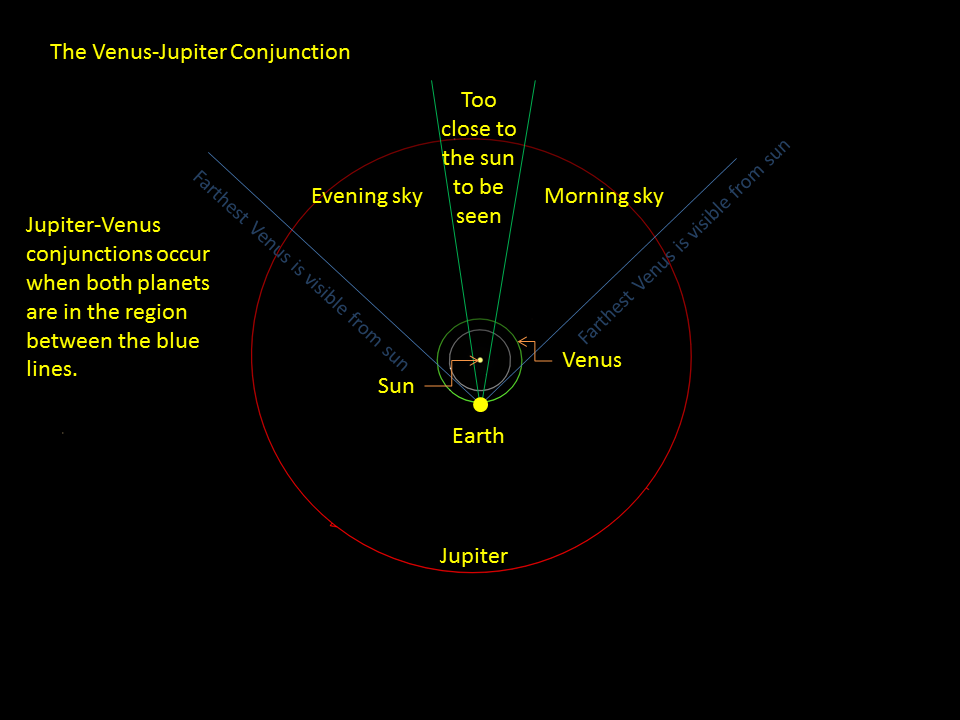 During the August 2016 conjunction, Venus is emerging from behind the sun (superior conjunction).  Venus is only 22 degrees from the sun, setting 56 minutes after the sun, and before Nautical Twilight.  Jupiter is nearing its solar conjunction which is caused more by the earth’s revolution than Jupiter’s orbital movement.  The two planets are about 450 million miles apart, although they appear about 7′ (7 minutes= 0.10 degrees, much less than a full moon diameter) apart.

Here are the events leading up to the conjunction.

While not a good appearance, the evening of August 4, 2016, presents another opportunity to view all five naked eye planets simultaneously.  Locate a clear horizon looking west.  Venus stands about 3 degrees above the western horizon.  While it is bright in the twilight, binoculars may be needed to first locate it.  A thin crescent moon appears 10 degrees to the upper left of Venus, with Mercury  2 degrees to the upper right of the Moon.  Jupiter is higher to the upper left of the moon (14 degrees).  Saturn and Mars are in the southern sky, near the star Antares.

On August 6, the separation between Venus and Jupiter decreases to 21.5 degrees with the moon 10 degrees to the upper left of Jupiter.

On August 15, Mercury is rapidly disappearing from the sky.  Tonight Venus and Jupiter are 12 degrees apart. 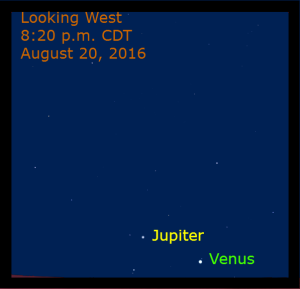 By August 20, the Venus-Jupiter distance is 7.5 degrees.

Two evenings later and the evening before the conjunction, the Venus-Jupiter distance is 54′ apart.

August 27, 2016 is conjunction evening when the two planets are 7 arc minutes apart!

On the evening following the conjunction, the planets are 1 degree apart. with Jupiter to the lower right of Venus.

On August 30, the planets have separated to 3 degrees.

The planets continue to separate and Jupiter disappears into the sun’s glare heading for solar conjunction (September 26, 2016).