The constellation Orion is visible high in the southern skies during the early evening hours of February.  It is easily recognizable by its three stars of nearly equal brightness that mark his belt.  Within his sword is a gently glowing nebula.  Through binoculars or a small telescope it appears as a greenish cloud with stars in it.  The Hubble Space Telescope gathered the light of this distant stellar nursery to make this colorful, dynamic image shown above.

The length of daylight increases by 70 minutes this month.  The sun rises and sets farther north and appears 9 degrees higher at noon by month’s end.  The rising and setting directions move about 12 degrees northward during the month.  In the Chicago area, the sun rises before 7 a.m. the first time this year on February 5.

There is an annular solar eclipse on February 26, although it is only visible from the southern hemisphere (Pacific Ocean, South America, Atlantic Ocean, and Africa.)

There is a penumbral lunar eclipse on the evening of February 10, although the moon will not display is classic reddish eclipse color.  During this eclipse the moon passes through the earth’s outer shadow that is quite bright.  Casual observers will not see much change in the moon’s brightness during the eclipse.  The eclipse is visible across most of the planet except for eastern Asia and Australia.  In the Chicago area, the moon rises in the in the east-northeastern sky at 5;13 p.m. CST with the eclipse in progress.  As the moon rises higher, the eclipse progresses.  The maximum eclipse is at 6:33 p.m. CST when the moon is officially full.  (See the time of the full moon above.) The eclipse ends at 8:53 p.m. CST. 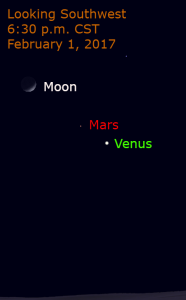 Gleaming Venus shines brilliantly from the western sky as the month opens.  Dimmer Mars is about 5.5 degrees to the upper left of Venus and the crescent moon is another 11 degrees above Mars. 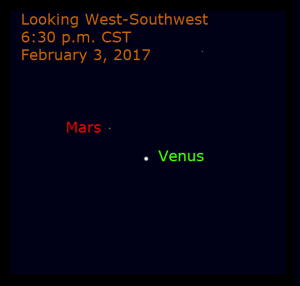 The planets are closest on February 3, still over 5 degrees apart.  Venus does not pass Mars; after this closest appearance, Venus rapidly moves toward the sun’s brilliance. 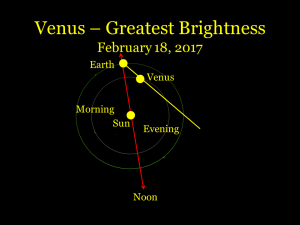 Beginning February 4 and lasting for nearly a month, Venus reaches its greatest brightness, with the mid-point date on February 18.  This period of greatest brilliancy occurs when Venus and Earth are near each other.  During this time, the distance to Venus is about 39 million miles, about 160 times the moon’s distance.  Venus is nearing its inferior conjunction when it passes between Earth and the sun, so it appears larger when viewed through a telescope than when it is near its superior conjunction on the far side of the sun.  This combined with its highly reflective clouds makes it appear to be the brightest star in the sky.

For More about Venus in the evening sky and its close approach to Mars, see these articles: 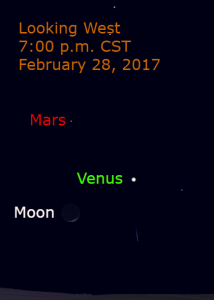 By month’s end, the moon appears again in the western sky after sunset.  On February 28, it appears about 10 degrees to the lower right of Venus with Mars 12 degrees to the upper left of Venus.

Meanwhile, Jupiter shines brightly from the southern skies with the star Spica.  The pair rises in the southeast at around 11 p.m. and are well placed in the southern sky before sunrise.  Jupiter’s proximity to Spica is part of a triple conjunction — that is, Jupiter passes Spica three times during a single apparition.  Jupiter first passed Spica on January 20, by about 3.5 degrees. 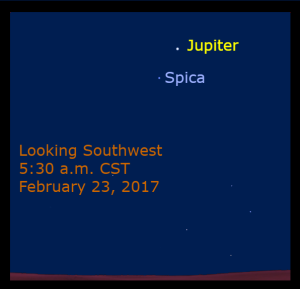 During early February, Jupiter appears to begin to backup, retrograde, and passes Spica again on February 23.  The third conjunction occurs on September 9. 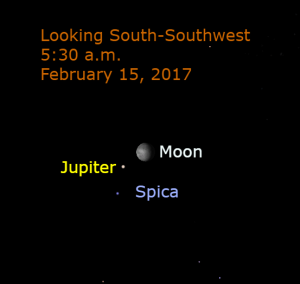 The waning gibbous moon joins Jupiter and Spica on the morning of February 15.  The moon is 3.5 degrees from Jupiter and Spica is nearly the same distance below Jupiter.  For more about Jupiter’s triple conjunction with Spica, see this article: 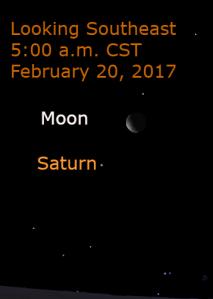 February offers four bright planets and a host of bright stars for easy viewing.  Dress warmly, step outside and take a look.